The history behind Herne Bay and its piers are very closely intertwined. You see, before the first pier was built in 1831 the town of Herne Bay scarcely existed, with the exception of a few fishermens’ huts and as a place for sea bathers. However, since then the town’s fortunes have been inseparably connected with those of its three piers.

Yes, there have been three piers!

In 1830 two London businessmen visited Herne Bay and decided they wanted to develop the area. One of these business visionaries, George Burge, had worked for the architect Thomas Telford on the development of St Katherine’s Dock in London. Burge realised that the shallow water close to the shore meant that any travelers wishing to land and enjoy the beach had to be brought across in small beach boats known as “hoys”.  This was an awkward and inelegant way of accessing the beach. He also knew that a similar issue over the Thames Estuary in Essex had been solved by building a landing stage in excess of a mile long. This stage enabled travelers to land from paddle steamers and walk or ride on a cart towards the resort at the end, which became known as Southend.  Burge planned to build something similar for Herne Bay.

Burge came back to London and convinced Telford to get involved with the venture. Thomas Telford was President of the Institute of Civil Engineers, but he was now 72 years of age. Although his name has forever been associated with Herne Bay, it is almost certain that the town’s first pier was actually designed by his chief assistant, Thomas Rhodes. Whereas Telford always worked in iron, Rhodes was a carpenter and he made the fatal decision to build the first Herne Bay pier from wood. Burge had no difficulty in raising the £50,000 of funds for the pier’s construction.

Work began in 1831 and was completed a year later. At the same time Burge began buying land and, with local landowner Sir Henry Oxenden, he became involved in planning the town’s development. Ambitious designs were drawn for the new town by local builder Samuel Hacker, including a series of elegant squares and a wide Promenade running parallel to the sea which for many years would be viewed as one of Herne Bay’s major attractions. 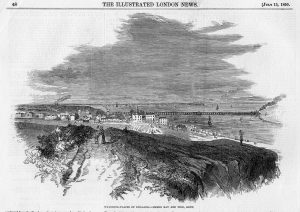 The first pile was driven on 4 July 1831 and, less than a year later, on 12 May 1832 the first passenger steamer, the Venus, docked at the pier head. The first pier was an incredible 3,613 foot long.   A sail powered trolley way was installed to transport alighting passengers and their luggage to the town. It made its debut run on 13 June 1833.

The decision to build in wood not iron meant that problems would soon arise. After only seven years the whole structure was in danger and urgent repairs were needed. The pier had become a victim of the devastating effects of the Teredo Navalis worm. It ate through the wood which had never been properly protected. The solution was costly and time consuming and involved driving nails into every single one of the inner and outer piles. But the greatest threat to the pier’s future came from a different direction. In 1861 the railway arrived in Herne Bay and the steamers which brought travellers from London to the end of the pier saw a huge drop in customers. In 1862, steamer services from London stopped entirely and the Pier closed. It was finally demolished in 1870 and the useful remains sold for scrap.

There were mixed feelings in the town as to whether a replacement pier should be built, but eventually the Herne Bay Promenade Pier Company financed a very modest structure at a cost of £2,000. Designed by Wilkinson & Smith the new pier was erected purely with promenading in mind, and extended only to a length of 320ft (97m), with a small bandstand at the end. It was opened on 27 August 1873 by the Lord Mayor of London.

In 1884 a new theatre opened at the approach to the old pier and three years later the formal gardens were laid out to celebrate Queen Victoria’s Jubilee.

Between 1881 and 1901 the town’s population almost doubled, from 4400 to 8400 and the last decade of the century saw Herne Bay begin to thrive again as a popular holiday resort. At the turn of the century the popular nickname for the town was ‘Baby Bay’. This was because so many nursemaids and children spent time here, enjoying the warm weather and healthy climate. 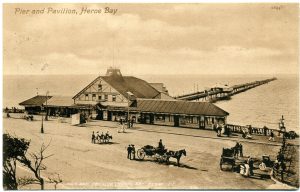 Throughout these years discussions continued about building a new long pier. In 1892 visits by shallow draft steamers began as an experiment to see how popular a new service would be. The experiment proved a success and by 1895 ambitious plans were underway for a new deep-water pier capable of handling regular steamers. Work on the new iron structure began in 1896.

However, the new pier was almost destroyed before the building work could be finished. One of the worst storms the town had ever experienced began on Sunday November 28th 1897 and reached its peak at midday on Monday 29th when the following description was written…

“It was then that the sea, with irresistible force, began to sweep every obstacle before it. As it thundered against the sea wall it tore the projecting wooden railing from its place as if it were merely matchwood. The paving was wrenched in pieces and eventually in place of the trim promenade, which had been for so many years considered one of the longest at any English watering place, there was nothing left but a chaotic, wreck-strewn waste. The houses facing the front were fortunately not so much injured as they might have been; but the damage done to them was considerable. The effect of the seas as they struck the sea wall and rose many feet into the air – solid masses of water throwing off foam and spray and rending everything within reach – was indescribably awful and grand.”

When it was finished this was the second longest pier in the country, running 3,787 feet (1147m) out to sea and requiring a small railway to carry the passengers and their luggage to shore.

The new pier was opened for business at Easter 1899 and in the first year the tram fares were £488. Although the new pier was a great success at attracting visitors to Herne Bay it was badly mismanaged by its owners. The Managing Director of the Pier Company, Henry Corbett Jones, was involved in a number of enterprises and in 1905 he was arrested and charged with embezzlement, falsifying documents and making false declarations. In 1909, after months of negotiation, ownership of the Pier was transferred to Herne Bay Urban District Council for a fraction of what it cost to build. 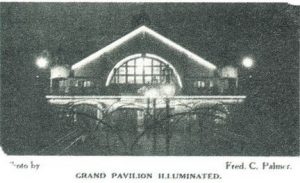 The Grand Pier Pavilion, Herne Bay, Kent illuminated on the night of its grand opening by the Lord Mayor of London on 3 August 1910.

A competition was launched to design the new Grand Pier Pavilion which was planned for the landward end of the pier. The winning design was by Percy J. Waldram and Messrs Moscrop-Young and Glanfield of London and the building was opened in 1910. The Grand Pier Pavilion was designed to seat 1,000, with an auditorium 130 feet by 95 and a ceiling height of 35 feet. It had a level floor to provide space for skating and dancing as well as a raised stage. It remained open for sixty years, providing the town with a venue for summer concerts, flower shows and exhibitions and civic ceremonies of all kinds.

During The Great War steamer services were suspended and saw the entertainments and tramcars being used as air raid shelters. Normal service resumed after the conflict, with the old tramcars eventually being replaced by a petro-electric tramcar built at Strode Engineering Works in Herne. Unfortunately, the wooden theatre at the entrance to the Pier, which had been retained from the second Herne Bay Pier, was destroyed by fire in 1928.

The outbreak of the Second World War in 1939 saw the end of the tram service. For the duration of the war the pier was closed and encased in barbed wire in case the Germans decided to land at  Herne Bay as part of their intended invasion. To prevent enemy troops from landing on the pier head and just running up the pier, two sections of the pier were removed completely in 1940.

If you look carefully at the video below of the World Air Speed Record in 1945 you can actually see the gaps in the pier. (view from about 32 seconds)

In 1948 Herne Bay experienced another terrible storm, equal to that of 1897.  Five years later, in 1953 the east coast of Britain took a terrible battering in February and the seafront and its properties were flooded. Ten years later, in the terrible winter of 1963, the sea froze. The pier which had stood for almost seventy years was beaten by the elements and declared unsafe. It closed in 1968.

The Grand Pavilion remained open at the shoreward end but was destroyed by fire in 1970 whilst work was being carried out on the pier entrance. Watch this amazing old BFI film by John Clague that shows newsreel of events in Herne Bay during 1969-70, including footage of the actual fire in 1970 (jump to 13:35).

A new sports and leisure centre, officially opened by the Rt. Hon. Sir Edward Heath on 5 September 1976 replaced the pavilion.

In 1977 local anglers were among campaigners pressing for the pier neck to be restored, but a severe storm on 11 January 1978 ended all speculation as the majority of the pier neck collapsed. 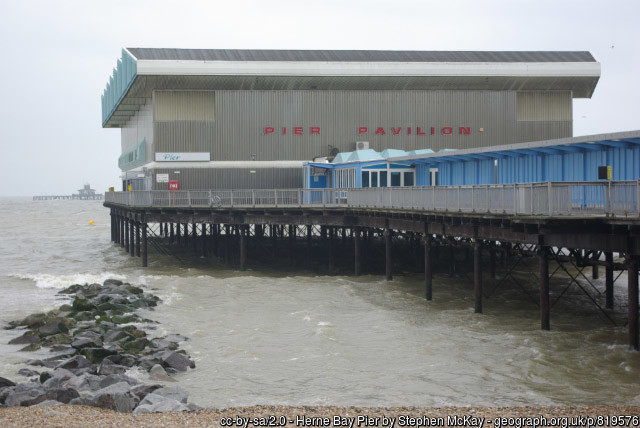 Now the Pier head has been left isolated at sea, a poignant reminder to residents and visitors to Herne Bay of just how long and grand the pier once was.

Local inhabitants, fishermen and tourists alike have never let go of the idea of Herne Bay Pier being rebuilt to its original glory.

In spring 2009 Canterbury City Council agreed to the formation of the Herne Bay Pier Trust. The main objective of the Trust is the preservation, renovation, reconstruction and enhancement of Herne Bay Pier. Canterbury City Council do not have the funding for such a project, so it is up to independent and possibly Government or European Funding to see this beautiful example of Victorian engineering brought back to its original glory.

Watch this drone footage of the pier in June 2018:

This article has been slightly rewritten and updated from the original article found on the old Herne Bay Pier Trust website via Archive.org.

Looking for more information about Herne Bay? Check out my guide to Herne Bay.  Looking to sell or let property in Herne Bay?

By continuing to use the site, you agree to the use of cookies. more information